The Layout at Prescott Lakes

Enjoy the journey through all 18-holes at Prescott Lakes! 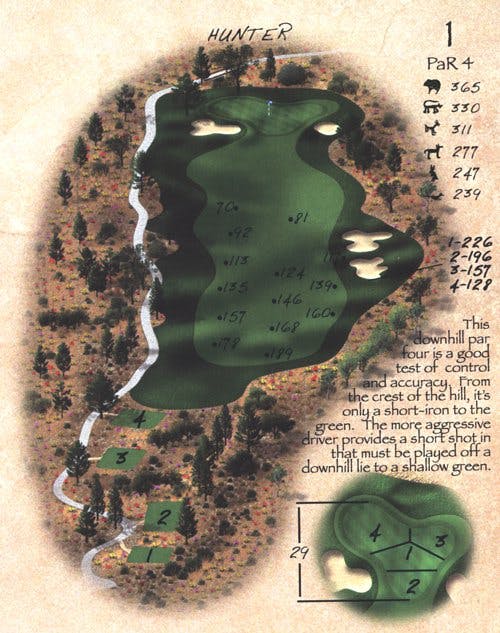 While the view from the tee box is long in every direction, the first hole at Prescott Lakes is one of the shorter par 4s on the course. Players will want to take a fairway wood or long iron off the tee and play to the crest of the hill. From there, a short iron can be played downhill to the wide and shallow green which is guarded by bunkers on both sides and an arroyo bordering the back. 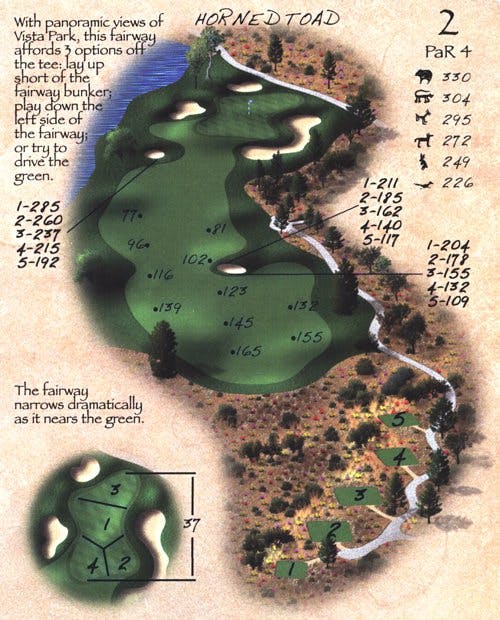 The second hole at Prescott Lakes is a strong risk-reward hole. Long hitters may try to drive the green, but water on the left and an arroyo up the right side will scare many players away from using their driver. A bunker in the middle of the fairway forces players to pick their club wisely if they choose to lay up off the tee. The two – tiered green is well guarded by a large bunker that wraps around the front and right of the green and two bunkers on the left and back. 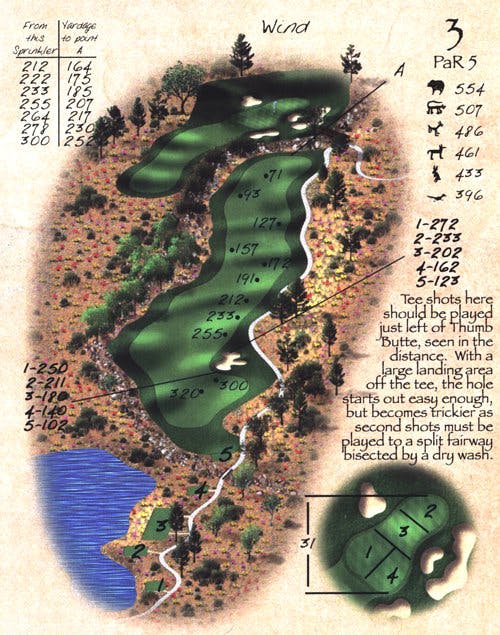 This hole tends to play as the most difficult hole on the course. An arroyo runs up the entire left side of the fairway before it cuts in front the green. Only the longest hitters can reach this long, narrow green in two. Most players elect to lay up short of the arroyo on their second shot in order to play a short iron in. An additional fairway across the arroyo to the left offers players an alternative shot to the green which is guarded by several deep bunkers. A par on this hole feels like a birdie to many who play the course regularly. 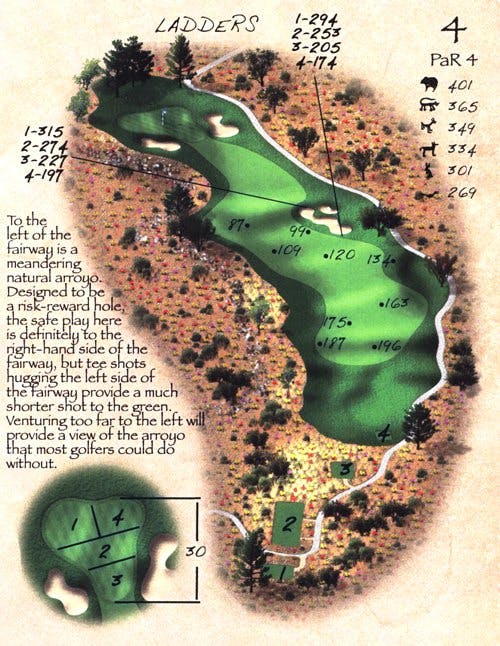 While not an incredibly long hole, it is essential that tee shots find the fairway. A deep arroyo running up the left side of the fourth hole prevents many players from cutting the corner of the dogleg and a complex of fairway bunkers up the right side will find errant tee shots. A second shot demands accuracy as only a narrow opening on the green exists between the two bunkers that guard the green. A steep ridge separating the two tiers of this green can make putting difficult if the ball comes to rest on the wrong side of the green. 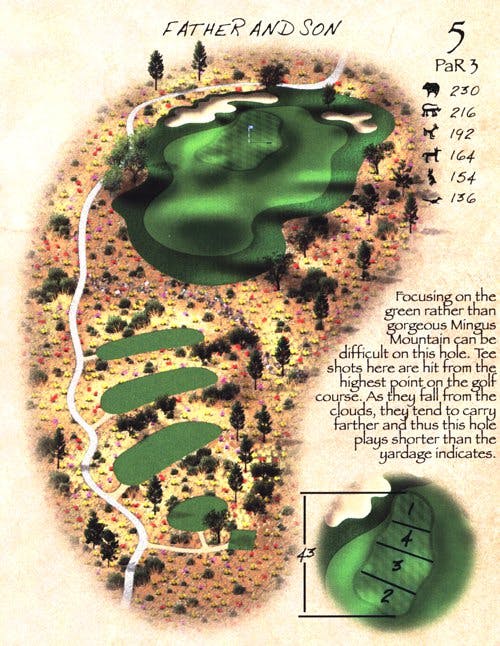 The tee box of the fifth hole is the highest point on the golf course. Views of Granite Mountain behind the tee and Mingus Mountain and the San Francisco Peaks in the distance behind the green tempt golfers to focus on the beautiful scenery, rather than the tee shot. The green is large and fairly flat, but balls that stay in the air too long may find their way into the bunkers that guard the green to the rear or deep grass swells in front. 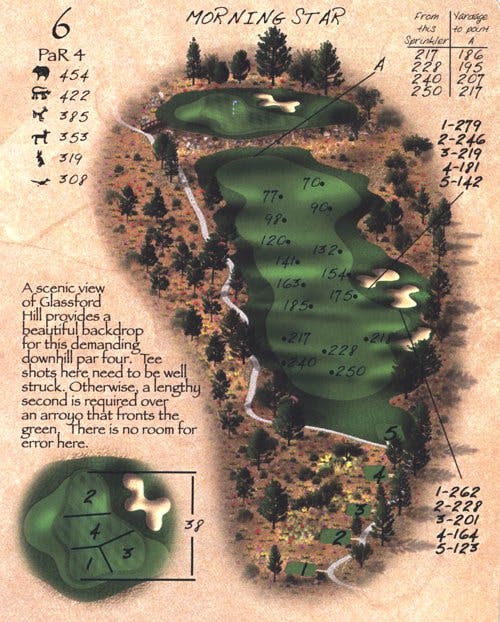 Out of bounds to the left of the hole and three large bunkers up the right find many tee shots that don’t find the middle of the fairway. Accurate tee shots down the middle of the fairway will tend to roll down the hill, allowing a shorter shot into the green. A shorter shot into the green is desirable due to the arroyo that prevents players from running up shots. Once over the arroyo, players must then negotiate a tricky green that is guarded in the rear by a deep bunker. 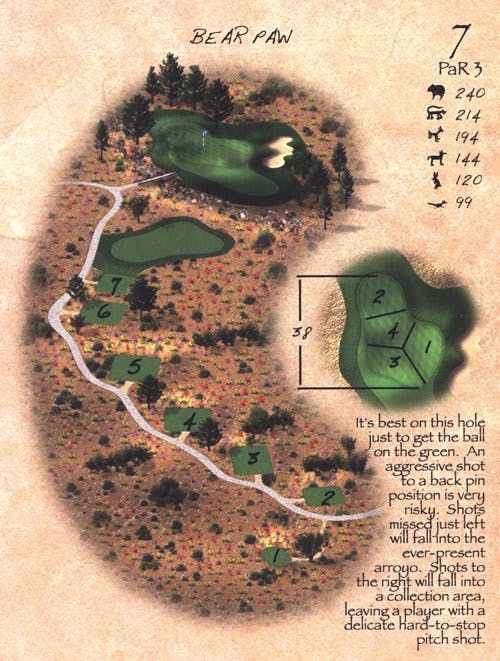 The seventh hole at Prescott Lakes is the most challenging par three on the course. From an elevated tee box, players must hit over the natural vegetation and an arroyo that borders the front and left side of the green. A deep bunker guards the right side of the large green. Players that miss the green will want to miss it short and right or they will have a very challenging up and down. 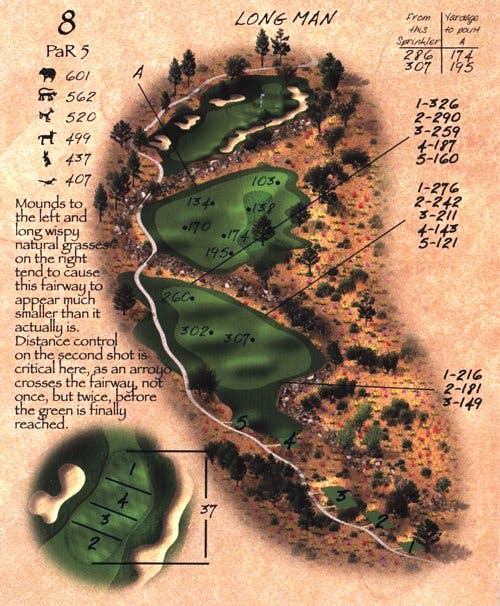 “Long Man” provides excellent views of the Granite Dells and Vista Park while meandering through a shallow canyon. A natural arroyo crosses the fairway not once, but twice during the course of this challenging par 5. The landing area of the first fairway narrows from the right the further the player hits the ball. Most players will choose to lay up on their second shot and hit a mid iron to the second fairway, while the longer hitters can choose to play over both arroyos to the third fairway. Strategy is the key to playing this hole as the three tiered green is well guarded on both sides by bunkers. 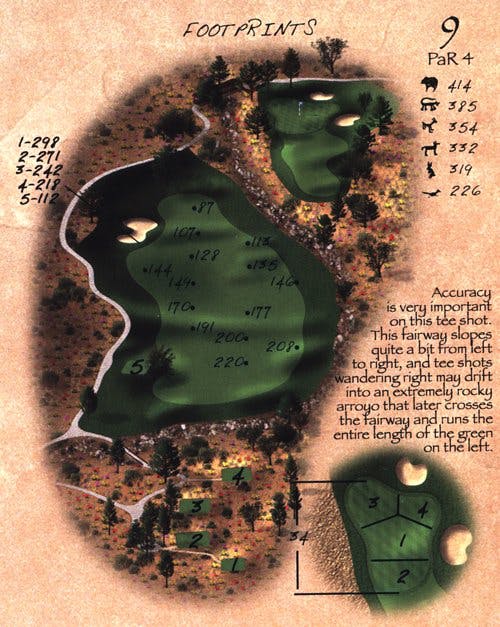 The large fairway of the ninth hole slopes down to the arroyo to the right, so tee shots should be played up the left side of the fairway. The arroyo crosses in front of the green and guards the left side while steep hills and bunkers guard the rest of the green. Players should take a moment and enjoy the view around this green as natural rock outcroppings and a covered wooden bridge provide a beautiful backdrop to this impressive hole. 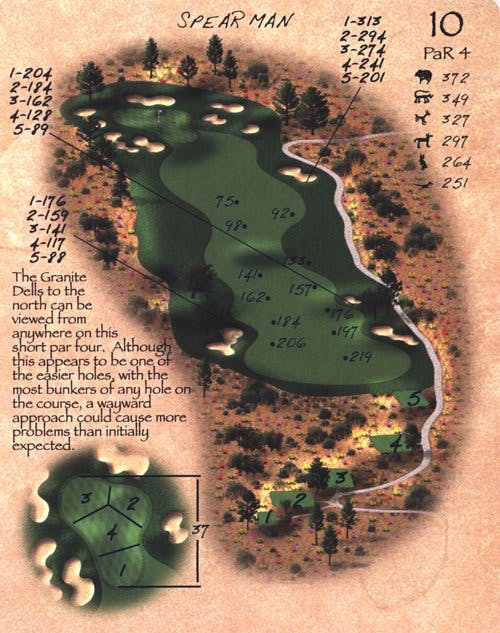 Players must carry an area of natural vegetation before their tee shots land on this very wide fairway. While not very long, the challenge of the tenth hole comes around the green which is guarded by several deep bunkers. Fantastic views of Willow and Watson Lakes and the Granite Dells frame this hole which many players view as a respite between some tough holes on the front nine and the challenging holes which finish out the round. 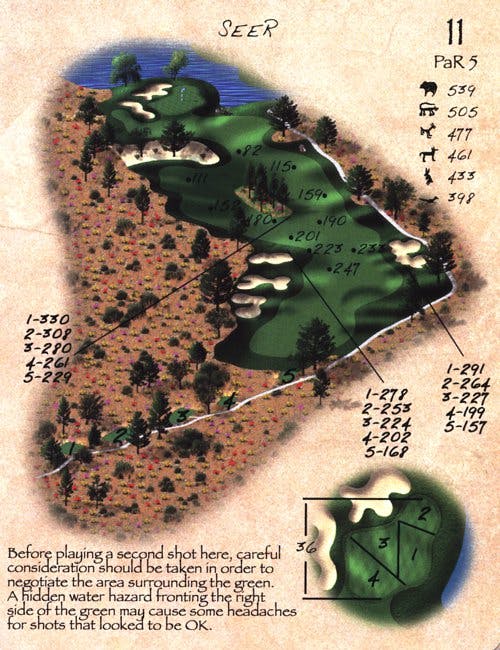 This short, downhill par 5 is a definite birdie opportunity. Bunkers guard the dogleg on the left side and only the longest of hitters should attempt to go over them. There is ample room on the right side of the fairway for bailing out, but the further right players go on this hole, the longer the hole becomes. Players who manage to get a clear shot at the green can go for it in two shots, but they need to be aware of the lake that wraps around the right side of the green. Bunkers guard the left and back side of the two tiered green. Sounds of water crashing down the waterfall adjacent to the green and panoramic views add a special touch to this hole. 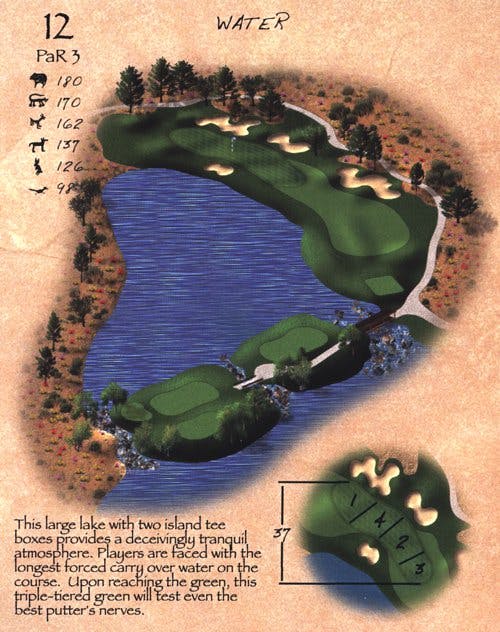 Aptly named, “Water,” is the third par 3 on the golf course. This hole requires players to carry their tee shot over the lake and between several bunkers that guard the green. The green is large with two severe slopes separating the three tiers. The covered bridge, waterfalls, gentle streams and the spectacular layout of the hole makes “Water” stand out as one of the most beautiful par 3s many players will ever experience. 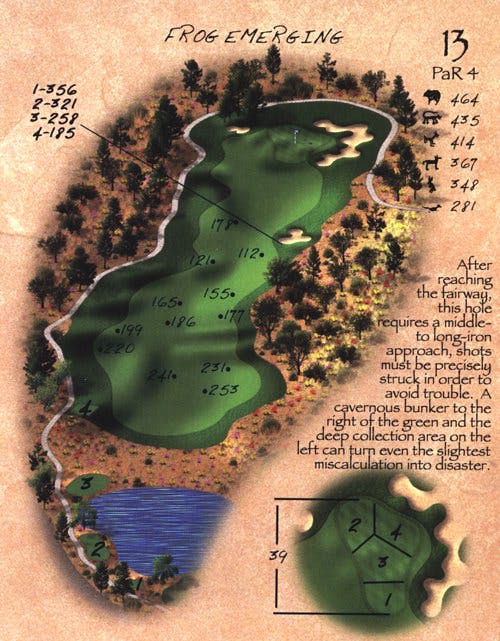 A long drive going over a lake and up the hill can really improve a player’s chances of par on this beautiful par 4. The green on the 13th is the furthest point from the clubhouse on the golf course and offers a spectacular view and challenge. Players need to keep in mind the pin placement on this hole, as a deep swell grabs balls to the left and a large deep bunker attracts balls that veer to the right. Missing on the short side of the green can be very costly. 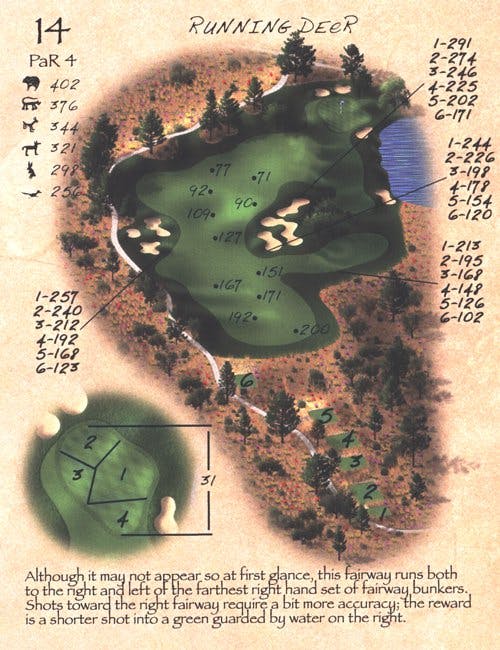 Players have a couple options on the tee box here. The safe shot straight away leaves players with a longer, downhill shot at the green while players who choose to aim the small fairway to the right will have a short, level shot to the green. A large complex of bunkers guards the dogleg between the two fairways. Approach shots should favor the left side of the green as balls tend to break toward the water on the right. 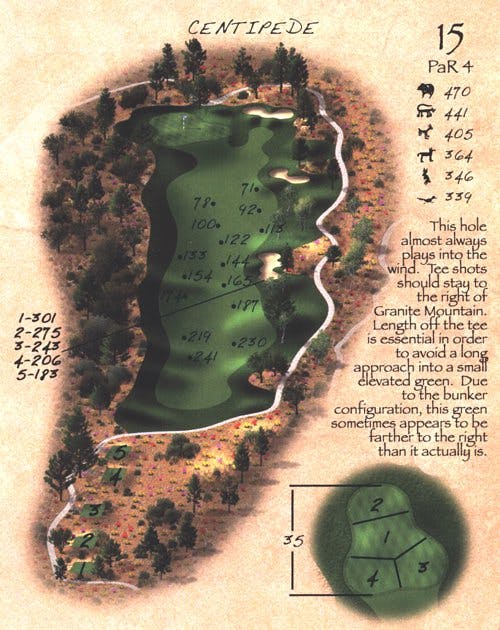 Many members call this the most difficult hole on the golf course. From the tee only a small portion of the fairway is visible. Out of bounds boarders the entire left side of the hole while fairway bunkers and more out of bounds cover the right side. If players are fortunate to find the fairway on this hole, a long iron or fairway wood is usually played to the elevated green. A severe slope separates the right and left side of this challenging green. Once play is completed on the hole, many players look back and see how beautiful it looks and are thankful that it is over. 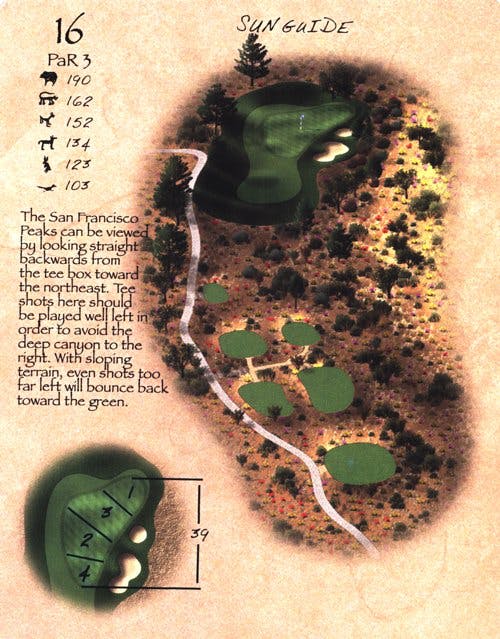 Situated in a small canyon, the sixteenth hole offers little bail-out room for players who fail to hit the green. A steep hill in back of the green, bunkers in front, and a creek running up the right side tend to draw the focus of the player away from the large green. On a clear day, players can look back to the tee box from the green and see the San Francisco Peaks on the horizon. 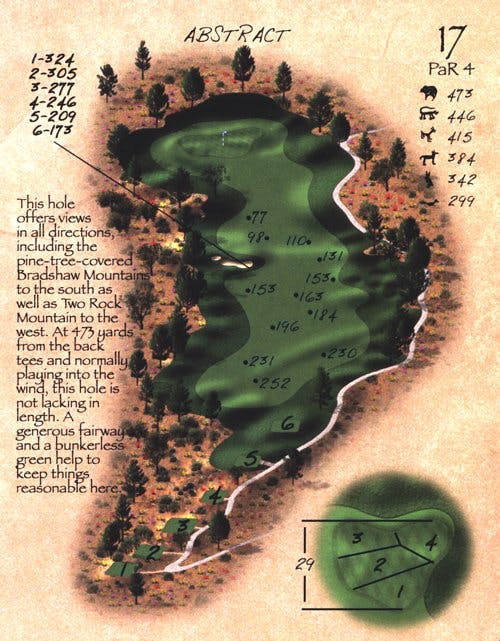 While the fairway is wide and there is little trouble bordering this hole, it is the length that sets number 17 apart from the other par 4s on the course. With a gentle dogleg to the left, the hole can play over 470 yards from the Black Bear tee box. The green has a narrow opening in front and large, deep swells that grab golf balls that don’t make the green. The green itself is large and undulating with a couple significant breaks that can make a two putt a challenge. 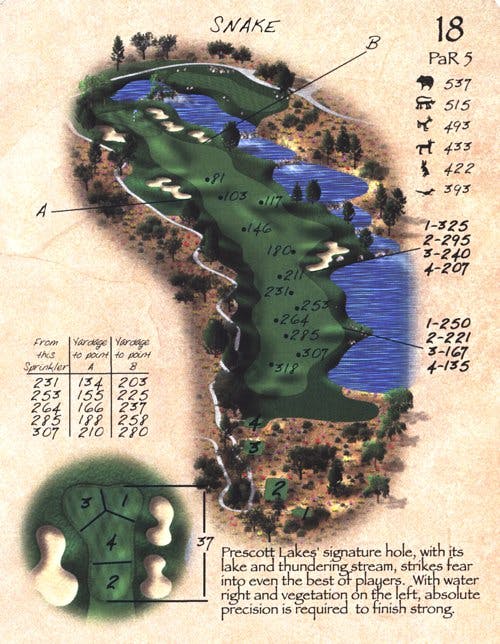 The signature hole of Prescott Lakes is the uphill, dogleg left par 5, number eighteen. The Prescott Lakes Athletic Club, can be seen over the lake and waterfalls that border the right side of the hole. Long hitters can try for this green in two, but fairway bunkers, greenside bunkers, and an uphill shot cause many to think twice about this option. Approach shots need to be accurate on this hole, as the green is very narrow and the bunkers that guard it are deep. The sound of putts dropping into the hole and crashing water from the many waterfalls around 18 provide the perfect experience to ensure that every round at Prescott Lakes Golf & Country Club is a memorable one.